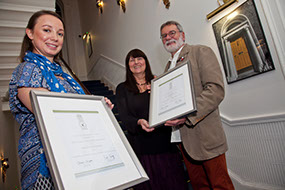 An organisation that embodies and protects the richness of Ireland’s agricultural legacy has today been announced as the winner of the 2016 Irish Food Writers’ Guild Community Food Awards.

The Irish Seed Savers Association, which this year celebrates its 25th anniversary, conserves and distributes rare and heritage seed varieties and encourages the skills of saving your own seeds. The Association plays an active and crucial role in helping keep Irish agricultural biodiversity alive and well at a time when sustainability is on both political and social agendas, not only in Ireland but at a global level.

The Irish Food Writers’ Guild (IFWG) Community Food Awards recognise and celebrate the contributions made by organisations, enterprises and individuals to furthering social responsibility and reward stellar community efforts in the food arena.  This is the second year of these annual awards and the IFWG is committed to recognising people who make a real difference to food and food practices in Ireland, primarily at a community level. This year’s awards were made possible with the support of Slow Food Ireland.

Entries to the awards can include food education, environmental or sustainability projects, food charity programmes, community initiatives or social entrepreneurialism. The awards are open to national, local and community programmes that contribute to the promotion of sustainable food and food practices in Ireland.

According to the judges, without the work of the Irish Seed Savers Association we would have already lost much of our food heritage. Its Education Project on Agricultural Biodiversity will have lifelong benefits for the young citizens with whom it engages and its long-term impact on Ireland’s policies as a food-producing nation could be immense.

Four other enterprises were recognised at the awards:

Aoife Carrigy, chairperson of the IFWG said, “These awards are very special as they recognise the broader significance of food within our communities and society: as a source of nourishment and enjoyment, and as a connector between people, but also as a birthright of citizens in terms of the need for equal access to good food produced in a sustainable manner.

“We have a shared responsibility to protect the future of our food. These Community Food Awards celebrateprojects we believe have made positive impacts, with an emphasis on inclusivity and a commitment to people and passion before profit. The awards aim to highlight some of the excellent work being done on both large and small scales within our communities, and to say thank you to those who carry out this often thankless work.

“This year’s winner is a national treasure that we feel must be nurtured and supported. At a time when international pressure is building around trade agreements such as CETA and TTIP, the passing of which could have serious detrimental effects on many aspects of our lives including our food production system, the existence of organisations such as the Irish Seed Savers is more important than ever.”

The winners were presented with their 2016 IFWG Community Food Award at an event hosted at The Cliff Townhouse in Dublin and supported by Slow Food Ireland and Poacher’s Tonic, with thanks to Blackwater Gin and Gunpowder Gin.

For more information on each of the five organisations recognised at this year’s Community Food Awards, click here.