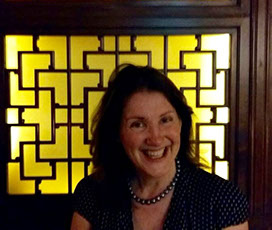 Corinna Hardgrave is a journalist and editor, specialising in food, wine and travel writing. She is a columnist in the Sunday Times and the restaurant and wine critic for Irish Tatler.

Her features have appeared in the Irish Times, The Sunday Business Post, Food & Wine magazine, Ireland of the Welcomes, Ireland’s leading independent hospitality guide and website, Georgina Campbell’s ireland-guide.com and a broad cross-section of on and offline publications. She is the former editor of Eat Out restaurant guide and travelled extensively as the editor of the Frequent Business Travellers Club magazine.

She is an experienced recipe editor and compiled the Homes of Good Food cookery book to go with the RTE television series on Irish country houses, which included Ballymaloe, Longueville, Rathsallagh, Marlfield, Newport and Hilton Park.

Corinna holds the WSET advanced qualification for wine tasting and theory and is a longstanding judge for high profile restaurant awards, including the Food & Wine Awards and the Restaurant Association of Ireland Awards.

She has extensive experience working as a marketing consultant both in creative agencies and in-house. She now consults with corporate clients on a project basis particularly in content marketing and digital marketing strategy. She is at the final stages of an MSc Management in Digital Marketing at DCU Business School.