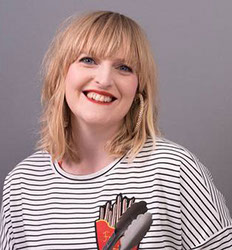 Sophie White writes the popular column,‘The Domestic’, in Sunday Independent’s LIFE magazine and also writes for HerFamily.ie, IMAGE magazine, The Pool.com and anyone else who’ll have her.

She (quite randomly) has a first class honours degree in Sculpture from NCAD. After training as a cook in New Zealand and spending many years living in Europe’s ski resorts and working as a private chef, she returned to Ireland in 2012. Her most recent stint in the kitchen was at the stove at Portobello’s Bibi’s Café though lately she spends considerably more time typing in her PJs and eating for fun as opposed to work.

She lives in Dublin by the sea, not in the idyllic setting you’re most likely imagining but a rather more industrial seaside setting. Let’s just say the Dublin Bay incinerator is a stunning new addition to the locale. Her first book, Recipes For A Nervous Breakdown, was nominated for an Irish Book Award. Her mini cooking series, Recipes For Actual Real Life is on the RTÉ player. She regularly contributes to TV3’s Ireland AM and also boasts an encyclopedic knowledge of Sabrina the Teenage Witch.