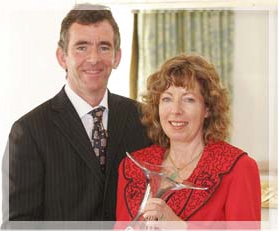 On Monday 25th February 2013, on what should have been the 55th birthday of the late and much lamented David Tiernan, many of Ireland’s broad family of food producers, promoters, writers, chefs and farmers travelled across the country to Dunleer, Co Louth. They came to pay their last respects to a man who described himself, with well-placed pride and in a very particular order, as “dairy farmer, cheesemaker and seller of raw milk”.

That evening, an extraordinary toast was made at a gathering of many of Ireland’s finest chefs. It was the AGM of Euro-toques Ireland, an organisation founded in 1986 by Myrtle Allen of Ballymaloe House – once described by David as his “greatest inspiration” – and committed to seeking out the very best of Irish food and supporting the very best of Irish farmers and food producers.

Into gleaming champagne glasses David’s precious raw milk was poured. Precious not just because since 2010, David Tiernan has been one of a handful of Irish raw milk producers to brave the Irish authorities’ resistance to the sale of unpasteurised, unhomogenised milk. (Indeed, thanks to the quiet determination of David and friends Ella McSweeney, Kevin Sheridan and Elisabeth Ryan of the Campaign for Raw Milk Ireland, the sale of raw milk looks set to become carefully regulated rather than banned.)

Nor precious simply because David’s unique milk made him one of the few producers to have been honoured twice by Euro-toques in their annual food awards. (He received his first in 2006 for his exemplary gruyère-style Glebe Brethan cheese and another in 2011 for his raw liquid milk.)

What made that golden-hued, creamy-textured liquid in the champagne flutes most precious was the man who had produced it, a man described by his brother and farming partner Pat Tiernan in that morning’s eloquent funeral eulogy as “an ordinary man who in so many ways was extraordinary”.

Eloquence runs in the Tiernan family. On Glebe Brethan’s website, David’s cows are lovingly described. “The Montbeliarde is beautiful in shades of dark chestnut with distinctive cream patches. She has a steady gait and inquisitive nature searching the hedgerows for the sweetest grasses and herbs.” She also produces extra creamy milk which is higher in protein and fat, a factor which lead David to found the Montbeliarde Cattle Society of Ireland in 1997.

David said that the proudest day of his life was the day his wife Margaret brought twin sons James and Leo into this world. He also took a familial pride in his closed herd, built up on his fourth-generation farm from two cows imported back in the mid-1990s. As cheesemonger and close ally Kevin Sheridan observes, “He was so proud of that land and his cows, and so he was proud of the milk they produced. He was never surprised when someone would say how good it was or how it was the best milk they ever tasted; he would just nod.”

They suited each other, David and the herd described on his website as “solid and stoic in appearance, serene and placid in nature and never in a hurry”. He might have been describing himself, and his steady, unhurried journey to becoming one of Ireland’s most highly regarded artisan food producers. No matter that David came to cheesemaking less than ten years ago – to the likes of Kevin Sheridan “it always felt like he was one of the originals, representing everything that Irish farmhouse cheese aspires to”.

But David remained a dairy farmer, first and foremost. The cheese and the direct sales of milk were vehicles: an albeit meticulously crafted means to the treasured end of continuing his farming legacy. “While everyone agrees that his cheese is absolutely outstanding, what was really unique about David,” suggests Ruth Hegarty, Secretary of Euro-toques Ireland, “was that he recognised that what he was doing – and what had been done by his family for three generations before him – was really special.

“He recognised that their milk deserved to finish up somewhere better than in one huge vat in a creamery to be pasteurised and homogenised and packed on supermarket shelves, with little return for the farmer who had done everything to the highest standards and produced something of great value.”

As Secretary of the Irish Food Writer’s Guild, I had the personal pleasure of David and Margaret’s company during the Guild’s 2011 Irish Food Awards lunch. They were there to collect yet another award for his wonderful Glebe Brethan cheese. He told me he was surprised by the passion he had discovered for cheesemaking and that his cheese was getting better every year. He spoke in his quiet, understated way about the magic of walking his cows up a lane at 5am, knowing that they were about to give him the precious milk to produce what Kevin Sheridan describes as “those huge wheels of cheese, each one special, packed with the complexity of his land, his cows and himself”.

David Tiernan was a dairy farmer by birth, and at heart. But through his too-short life he developed the accumulated skill and craft of an artisan, displayed the singular soul of a poet, and won friends and admirers countrywide with what was the charm of an Irish country gentleman in the truest sense of those words. Kevin speaks for so many when he says, “We will miss his beautiful cheese, but we will miss David, our friend, so much more.”

David once said he would “walk to Cork for Myrtle Allen”. It may have surprised him to have known how many of the Irish food community would and did cross the country to pay their lasting respects to him. He was, for so many, one of the greatest inspirations: a true legend from that land of legends, Co Louth, and one of the most extraordinary of ordinary men.