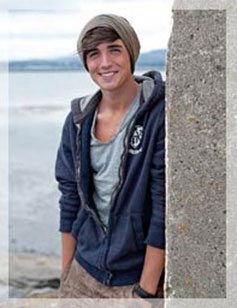 Donal Skehan is a home-cook, food writer and television presenter who has written three cookbooks, Good Mood Food (Mercier Press, 2009), Kitchen Hero: Bringing Cooking Back Home (Harper Collins, 2011), and Kitchen Hero: Great Food For Less (Harper Collins 2012). He has presented two 14-part, prime-time Irish television cookery programmes which have been sold to the UK, France and Brazil and his books have been translated to both German and Swedish. Donal’s ethos on cooking is that all his recipes should be accessible, inspiring and encouraging for the everyday home-cook.

He has been cooking from the age of four when he flipped his first pancake and has been in the kitchen ever since! Inspired by a family of passionate foodies, his parents run a food production company, and cooking and eating hearty home-cooked food has always been a way of life. Donal is also an accomplished food photographer and his photography skills have been put to good use as he photographs all his own food images for his blog and books.

In 2007 Donal started his own food blog, where he writes about his food adventures and recipes. After only six months blogging he was approached by Irish publishing house Mercier Press to write a cookbook based around the recipes on the blog.

Good Mood Food was released in October 2009 and received fantastic reviews from FOOD&WINE Magazine editor, Ross Golden-Bannon (“Good Mood Food is a new breed of cookbook that springs from the talent of a passionate home cook. A truly scrumptious read.”); Paulo Tulio (“At last… Simple, easy recipes that are healthy and interesting. Donal Skehan’s book reclaims good food from the convenience of supermarket shelves and puts it back where it belongs – in the domestic kitchen.”) and RTE.ie, which described him as “Ireland’s answer to Jamie Oliver”.

After the success of Donal’s first cookbook he was signed by UK publisher Harper Collins for a two book publishing deal. After winning the best Irish Food Blog in March 2010 it was revealed that in November 2010 his book Good Mood Food was nominated at the highly respected Irish Book Awards, and at a ceremony opened by the President of Ireland, Donal beat off stiff competition and won the best Irish published book category.

A television series quickly followed and in January 2011 it was announced that RTÉ had commissioned a 13-part prime-time television series starring Donal, titled Kitchen Hero to coincide with the release of his second cookbook.  Both book and TV series were released in Ireland in the spring of 2011 to rave reviews and high viewing figures.

UK TV network Good Food Channel snapped up the series and began airing the show in April 2012.  Kitchen Hero has also been published in both Sweden and Germany.

In March 2012, Donal was invited to appear as a guest on the Today Show on NBC and cooked up a storm with hosts, Kathie Lee Gifford and Hoda Kotb.

In May 2012, Donal’s third cookbook was released in both the UK and Ireland to coincide with his second 14-part prime-time TV series on RTÉ.

Donal’s recipes and food photography are regularly featured across the world and have appeared in many publications. At home in Ireland he writes a weekly column in The Cork News, is a regular contributor to the Irish Independent Weekend Magazine and FOOD&WINE Magazine and updates his blog with new recipes on a regular basis. He regularly gives cookery demonstrations and book signings.

Donal’s TV and radio appearances include:

Today Show on NBC (US)

This Morning on ITV (UK)