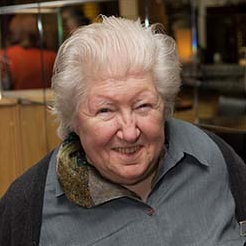 The doyenne of Irish food writers for more than half a century, Honor Moore died on May 29, 2013, a day after her 90th birthday. Honor began writing cookery columns in 1946 and continued to write and to cook with flair and enthusiasm almost to the very end. She was President of the Irish Food Writers’ Guild from 1991 until her death.

She is remembered in a piece by Kieran Fagan here.

Brief spell of teaching in Belfast and North Down

Restaurant and Welfare Officer for N.AA.F.I..in N.I. and England

From 1946 worked as a freelance food writer, creating recipes and setting up food for photography

Irish and British chapters on food in ‘Culinaria’ for a German publisher.

Had been working on ‘A Cook’s Life’ (provisional title)