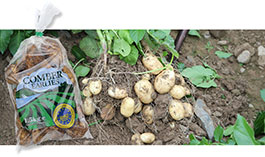 The second Comber Potato Festival will take place in the town’s main square this Saturday from 10am-5pm. An array of Northern Ireland’s top food producers and chefs will be there, but the star of the show will be the superspud that is the Comber Early.

This free event will be a celebration of this princely potato, which has been awarded EU PGI status putting it in the same league as Champagne and Melton Mowbray Pork Pies.

• Food stalls where customers can buy and sample the potatoes and meet the producers.

There will be so many of Northern Ireland’s best and most loved producers in attendance, along with lots more new faces. Here are some of the names confirmed so far…