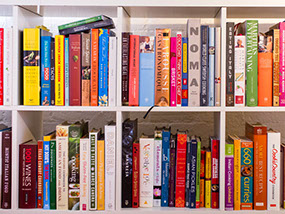 With more than 60 members ranging from cookery authors to broadcasters and journalists, food stylists and recipe developers to magazine editors, the Irish Food Writers’ Guild are a diverse bunch. But if there’s one things that we have in common, it’s got to be a pretty mean collection of cookbooks built up over the years.

We’ve decided to do a collective declutter and a bit of fund-raising for the IFWG while we’re at it. Of course there are books within those personal collections that we’ll never tire of or part with. But for many of us, we’re in possession of some fantastic cookbooks that we know deserve a better home: because we ended up with duplicate copies, or because we’re moving house, or just to make space for new publications.

We’re selling hundreds of these at just €5 each, on Sunday 30th October, 11am–5pm at the Dublin Flea Market in Newmarket Square (look for us inside in the Dublin Food Co-op building). Some of these are well-thumbed classics but many are good as new. Either way, there’s some serious treasures to be unearthed so get there early for the pick of the crop and get your Christmas shopping started – and a few treats for yourself too of course.