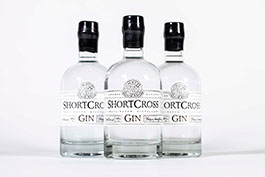 An exciting new Irish craft gin launched this year has set tongues wagging in the market for good reason, Myles McWeeney explains why.

Once disparagingly referred to as ‘mother’s ruin’, gin, the juniper-based white spirit that goes so well with tonic water, is rapidly overtaking vodka as the go-to tipple for the 20 to 30-something generation. While it has always sold well historically, gin is currently enjoying a remarkable upturn in popularity around the world, particularly here, in the UK and all around Europe. Cleverly surfing this surging wave of ‘g-interest‘ (ouch) are the Northern Irish husband-and-wife team of David and Fiona Boyd-Armstrong, who earlier this year launched a hand-crafted artisan Irish gin called Shortcross.

In 2012, the Boyd-Armstrongs set up the Rademon Estate Distillery in Co. Down, Northern Ireland’s first craft distillery, specifically to make Shortcross. An Chrios Ghearr is Irish for ‘the short cross’, which gives its name to Crossgar, which is the town land closest to the distillery. Launched in April this year, the couple’s hand-crafted product has been quite literally a wild success from the very start, going viral on social media within days of its release. Within a matter of weeks, it had won a Silver Medal at the 2014 International Wine & Spirit Competition, and subsequently went on to take a Gold Medal in the Super Premium Gin class at the 2014 Gin Masters Competition and a Silver Medal in the Spirits Category at 2014 Blas na hÉireann Awards.

We in the Irish Food Writers’ Guild recently had the opportunity to see for ourselves what all the fuss was about when David and Fiona came down and introduced us to their spirited baby.  It was easy to see exactly why Shortcross Gin has wowed so many discerning gin lovers. It is a really vibrant drink, with a wonderful floral, meadow-sweet bouquet, restrained exotic botanicals on the palate and it delivers an exceptionally long and smooth finish… And that was before we added the tonic!

It is a truly classic gin in that the blend of exotic botanicals includes juniper berries, without which it could not be called gin, coriander seeds, cinnamon bark, cassia root and a touch of orange and lemon peel; but what makes it truly unique are the native Irish aromatics that the Boyd-Armstrongs themselves have foraged from the woods, fields and hedgerows surrounding the distillery and their family home and added to the blend. There are apples from their own orchards, elderflowers and elderberries from the hedges and sweet honeyed clover from the meadow in front of their house. It is made in very small 250l batches in their German custom-made copper still, and the water they use to temper the 96-degree base spirit is drawn from their own 200ft deep well.

Shortcross Gin is also beautifully packaged, with a distinctive bottle including the personal touch of a visible handwritten batch number and featuring an emblem of the historic Short Cross penny, which dates back to the 10th century. It really stands out on the shelf in bars and off-licences.

David and Fiona have every right to be proud of their creation, which is a really exciting addition to the burgeoning range of artisan-crafted spirits being produced in Ireland. The RRP is €49.99, and is distributed across Ireland by James Nicholson Wines and is available in the Celtic Whiskey Shop in Dublin. See www.jnwine.com and www.celticwhiskeyshop.com to buy online.