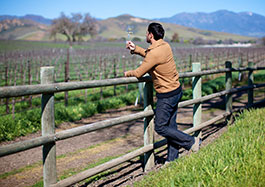 The 26th Galway Film Fleadh, in association with wine merchants Cases Wine Warehouse, are delighted to present an innovative sensory screening of Somm, a unique documentary which takes the viewer on a humorous, emotional and illuminating look into a mysterious world – the Court of Master Sommeliers and the massively intimidating Master Sommelier Exam. This will be the first festival screening of Somm in Ireland.

On Wednesday, 9th July at 8pm, ticket holders will sample wines as they are discussed on the screen, in the Veranda Lounge of the Radisson Blu Hotel. The screening will be preceded by a brief introduction to the wines from Peter Boland of Cases. Somm has won multiple film festival awards and all the wines set for tasting are top-end examples of their style so the night should prove a thrilling experience for wine lovers and film buffs alike.

Somm is the story of four friends attempting to conquer an exam with a failure rate of 90% – the prestigious Master Sommelier Exam. This is a test that can cover literally anything to do with the entire world of wine and that’s only the beginning of the challenge! In over fifty years, fewer than two hundred people have ever earned the title of Master and the ones who succeed have risked their personal lives, their wellbeing, and often their sanity to achieve this feat. Known for its secrecy, access to the Court Of Master Sommeliers has always been strictly regulated and cameras have never been allowed anywhere near the exam until now.

Tickets are €30 including wines. Spaces are limited so early booking is recommended. Further information and ticket booking is available at www.galwayfilmfleadh.com.