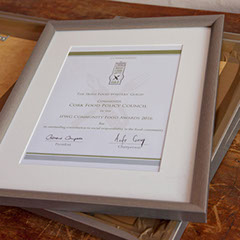 Nominations are being invited by The Irish Food Writers’ Guild (IFWG) for an important award that recognises individuals, businesses or organisations in Ireland that have embraced an ethos of social responsibility to an outstanding level.

Now in its third year, this annual award shines a light on initiatives that might otherwise fall under the radar but which are making a significant contribution to the role that food plays in communities all over Ireland.

A wide range of food-related initiatives, big and small, could be nominated for this award. For example, food waste, community garden and food poverty initiatives were recognised at 2015’s inaugural awards, when the Bia Food Initiative (now the Food Cloud Hub) was awarded overall winner.

In 2016, initiatives promoting accessible employment, organic gardening and food growing were commended, with Irish Seed Savers Association recognised as the overall winner for their educational role in promoting biodiversity and protecting Irish food heritage. The main considerations are that the project is well managed and transparent and that it has a positive relationship with the community in which it operates.

Nominations for the Community Food Awards are welcomed from individuals, businesses and organisations who wish to nominate themselves or others.

The Guild will be accepting nominations for this award up to and including Thursday, 28th September 2017. Entry forms are available here and or on request from the Guild secretary, Kristin Jensen, at jensen.kristin@icloud.com. There is no entry fee.

These annual awards have been made possible thanks to the continued support of Slow Food Ireland. Both organisations are committed to recognising people who make a real difference to food and food practices in Ireland, primarily at a community level. The awards will be judged by the members of the IFWG and the winner announced in early 2018, as part of the Guild’s annual Food Awards.

Aoife Carrigy, Chairperson of the IFWG, said: “The Guild aspires to being ‘a voice for better eating’. There are many people and organisations working hard to tackle social issues related to making, eating and accessing good food in Ireland. These awards are our way of using that collective voice to champion this important work.”

Click here for further details of the awards, including previous winners.