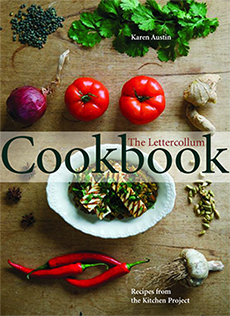 The Lettercollum Cookbook – Recipes from the Kitchen Project is a new cookbook launched this week, edited and published by Guild member Roz Crowley.

The Lettercollum Kitchen Project, run by Karen Austin and Con McLoughlin, is a West Cork institution. For ten years it has been the jewel in the crown of Clonakilty; a bakery and delicatessen that is celebrated for its delicious food, creative menus and fresh, organic, seasonal produce, often grown in the walled-in garden in the grounds of Lettercollum.

From Bali to Cadaqués, Tripoli to Timoleague, Karen has travelled the globe and brought the inspiration for new flavours and ingredients back home. Her dishes blend the very best of Irish cooking with a sprinkling of the exotic. Fodor’s have named her a ‘master of the vegetarian and ethnic repertory’ and with dishes like Thai Pumpkin Soup, Spinach and Ricotta Gnocchi and Beetroot and Chard Tart, it’s easy to see why.

Adding some easy fish dishes, a hint of chorizo and her most requested desserts, Karen shares her favourite recipes to shake up your lunch and dinner routine and get cooking some lip-smackingly good food!

Born in Kent, England, Karen Austin learned to cook in restaurants during eight years in Antwerp, starting as a dishwasher and working her way up to commis chef. In 1982 she moved to Ireland and with her partner and now husband Con McLoughlin opened a hostel, then Lettercollum House, a restaurant in Timoleague in West Cork, Ireland. Since 2004 with Con she grows fruit and vegetables used to make sweet and savoury tarts, pizzas, breads, cakes and seasonal treats, as well as selling wholefoods, wine and freshly brewed coffee at The Lettercollum Kitchen Project in Clonakilty. She runs cookery classes and occasionally takes groups on trips to cook in Spain and France. She has two sons and a daughter, a dog and a demanding acre of walled garden.

Arna Rún Rúnarsdóttir is a professional photographer based in Reykjavik, Iceland. Her work includes corporate photography in Iceland and England and food photography in France and Ireland. She taught photography at college level in Iceland and has exhibited her work in Winchester, London and Iceland. This is her fourth photographic assignment with Onstream. Our Daily Bread – A History of Barron’s Bakery, which extensively featured her work, won a World  Gourmand Cookbook award in 2012 and in 2013 My Goodness, a wholefood cookbook by Liz Nolan, was chosen Best Book in it’s category in Ireland.

The Lettercollum Cookbook – Recipes from the Kitchen Project