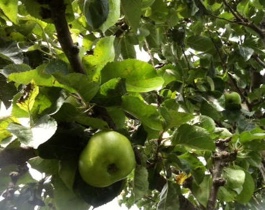 Georgina Campbell writes about one of Ireland’s much-loved, special food products, which has just been harvested at the end of last month – Armagh Bramley Apples.

The special qualities of the Bramley’s Seedling have made it the most popular cooking apple in Britain and Ireland, and those grown in Northern Ireland’s ‘Orchard County’ are extra special. Armagh Bramley Apples are among a very small number of Irish products to have gained the European Commission for PGI (Protected Geographical Indication) status – the other two in Northern Ireland are Lough Neagh Eels and Comber Early Potatoes.

It is one of Ireland’s latest fruit crops, harvested up to the end of October. However, there was plenty of fruit ready to pick in early September this year, in time for the Armagh Bramley Apple Festival held in Armagh City on Saturday 6th September, to celebrate the apple and its special status.

“Basically, what the PGI Quality Mark means is that no other Bramley apple has quite the same attributes as one from the Diocese of Armagh, thanks to the distinctive climate and environmental conditions of the region in which they are grown and the way they are nurtured,” say the organisers. “Our Armagh Bramley Apples are a bit bigger than most, have a flatter top and bottom, are solid green in colour with a reddish blush, are more robust for a longer shelf-life, and, perhaps most importantly as a culinary apple, they have a delectable tangy flavour and maintain that taste and their texture when cooked.”

From the grower’s viewpoint, the Bramley is disease and pest tolerant, producing a good crop of large apples in most years. The apples are hard, have good flavour and keep well so they can be sold over a long period. When it comes to the all important cooking and eating qualities, cooks find the large size convenient for preparation and their natural sharpness is a great quality too, balancing the sweetness of pastry and any added sugar, while the fruit acids help break down the apple during cooking so that it ‘falls’ to produce a unique fluffy purée.

Armagh, ‘The Orchard County’, has a history of apple growing that goes back ‘forever’. St Patrick, the early monasteries, and William of Orange are among the many with historical references linking apples – and cider – to the area, and there are many folk customs associated with apples, especially at Hallowe’en.

Nowadays most of the commercial Armagh Bramley crop is prepared for apple sauce and bakery, and the rest is retailed whole or juiced. Interestingly, however, although they are grown specifically for cooking and they are quite sharp, the Bramley’s flavour is delicious and anyone without a very sweet tooth is likely to enjoy them raw too, especially after some time in storage when the natural sugars have developed and mellowed the flavour.

The Loughgall Manor Estate and Country Park (Main Street, Loughgall, Armagh BT61 8HZ; between Portadown and Armagh via the B77), is in the heart of the apple growing area. It has a walled garden containing a fascinating Heritage Orchard with a collection of 130 native Irish apple varieties established by The Armagh Orchard Trust; the research centre, Agrifood & Biosciences Institute (AFBI) is also on the property (+44 (0)28 90 255636; www.afbini.gov.uk).

Aside from their historical importance, old varieties are of interest because they flourished before chemical treatment for pests and diseases was the norm, so they tend to have natural resistance to diseases such as scab – and their flowering habits make them less vulnerable to late frosts, providing quality fruit over longer harvesting periods.

The original tree was planted over 200 years ago, and trees dating from around that time still stand in commercial orchards in Ireland today – so, next time you enjoy a juicy Armagh Bramley apple pie or a big baked Armagh Bramley apple, it may be interesting to reflect that the apple could have come from a tree over a century old.

1. For the vinaigrette, place broken up goat’s cheese into a mixer and beat with the cream until smooth, place into a piping bag, cut the apple into thin slices then slice again to create matchsticks of apples, peel the celery and slice finely to match the size of the apple.

2. To make the chutney place the apple and celery in a heavy bottom pan and mix the butter and the sugar through to create a jam consistency, set aside.

3. Cut the pitta bread into desired shape, then char grill and place in the oven until crispy.

4. To assemble place the toast on the plate then pipe the mousse onto the bread, then arrange the chutney around the toast, toss the leaves in the vinaigrette and garnish the plate, season to taste.

1. Preheat oven to 190°C / 375°F / Gas 5. Cut a lengthways slit in each pork fillet to make a pocket. Fill each pocket with apple and cheese but don’t overfill. Wrap each fillet in Parma ham completely, using four slices per fillet. Cut each fillet in half.

2. Heat a large frying pan with some olive oil, add the wrapped pork fillet and cook until lightly browned all over, turning occasionally. Then transfer to a baking tray and roast for 10 to 15 minutes until cooked, remove from oven and allow resting for five minutes.

3. Cut each fillet in two and serve on a bed of braised red cabbage with champ.

5. Finely chop the onions, fry in a knob of butter until soft, add bottle of the cider and cook until reduced by half. Add your chicken stock, wholegrain mustard and cider vinegar and cook for 10 minutes then add cream, salt and pepper. Cook for a further five minutes to thicken and serve with the stuffed pork.

For the caramel sauce:

2. Cut the eating apple in half down the centre then thinly slice in half moon shapes, place decoratively on the base of a 10” cake ring.

3. Stew the cooking apple and add 100g sugar to sweeten, and place a layer on top of the eating apples, pour the caramel sauce on and even out.

4. Cream the butter and remaining sugar until light and fluffy, add in the eggs and flour in two lots, mix well until combined.

6. When cooked pour a splash of Bramley apple juice over the sponge and turn out onto a plate.

7. Can be served hot or cold but best served straight away with a homemade vanilla ice cream.

8. For the caramel sauce:

This feature was kindly supplied by Georgina Campbell’s Ireland. Visit: http://www.ireland-guide.com for more.