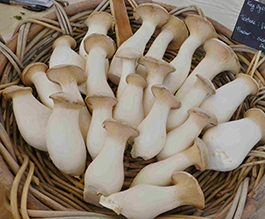 Joe McNamee, from the Irish Examiner, reports on the disconcerting topic of food fraud in Ireland and a recent example of it.

Lucy Deegan and Mark Cribben, of Ballyhoura Mushrooms, producers of absolutely superb, multiple-award winning Irish-grown exotic mushrooms, have yet again come across a restaurant menu falsely claiming to feature their award-winning produce. It is far from the first time this has happened: restaurants either purchasing for a spell and then continuing to use the Ballyhoura name long after their supply has run out; or worse, those restaurants claiming to use Ballyhoura mushrooms despite never having purchased so much as a single shiitake from the North Cork-based producers.

Recently, Cribben finally ran out of patience and decided to publicly name and shame the latest offender and appeared on 96FM, on the PJ Coogan Morning Show to talk about the issue. The Irish branch of Eurotoques, the chefs’ organisation dedicated to supporting traditional food practices carry an article in their constitution forbidding such practice but the Restaurants Association of Ireland have yet to reply to a request I made via twitter for their opinion on this issue. I was flying out of Ireland on the morning of the broadcast so couldn’t speak on the programme, but did give the producers the following statement to do with as they wished.

Passing off a food as something it is not, is food fraud, plain and simple. And if anyone thinks of it as, or tries to dismiss this as the work of a few bad apples, a few lone individuals, then they are being naive in the extreme. Food fraud is global and operates at every single level, from some of the small so-called artisan producers right the way up to the large multi-national behemoths, the retail multiples, the industrial food processors and the industrial producers. And the greater the demand for a product, the more likely greed will eventually lead to sharp or fraudulent practice. Take Italy, for example, where food fraud is estimated at €60 billion per annum and olive oil is one of the worse affected products.

Our parents and our grandparents knew how to shop; they would compare the wares of various retailers before purchasing and knew how to buy premium produce at the very best price. They were, for example, not only familiar with each cut of an animal, from the cheapest to the very finest but, what’s more, could tell the difference in quality by looking, touching, smelling. Many young people nowadays, often feeding families, would be hard pressed to even tell you the type of creature they are cooking.

It is something of an art form but one that has gone missing for several generations now. And the reason we lost it is because we traded it all in for convenience, the notion that shopping for food is just another tiresome chore and the quicker we get it out of the way, the better so we do it all in one fell swoop in an individual location, the supermarket. But convenience comes at a price, beginning with the extra we pay for our food. But worse than that is how we have given over all responsibility to others for one of the most fundamental of human requirements, nutrition, with no real idea of the nutritional value or quality of the food we are feeding to ourselves and our families, with no idea of how it was produced, how it was treated (chemical processes, irradiation etc) after harvest and, often, where it even came from.

Once upon a time, we knew were almost every single foodstuff we purchased came from, sometimes we even knew the producer and we knew exactly how they grew that produce or raised their livestock. Ironically, it is at the often-criticised farmer’s markets that I have been able to build up relationships with some producers whom I now trust implicitly. I can ask them questions, I could even, if I chose to do so, visit them and see their operations.

To take the aforementioned olive oil example, I am very comfortable buying olive oil that has been sourced directly by the Real Olive Company’s Toby Simmonds, visiting the producers in their olive groves, whereas tests performed on olive oils from major commercial producers plucked at random from the shelves of major multiple supermarkets around Europe have shown the contents to differ from the label; extra virgin that is neither extra nor virgin and sometimes oil that doesn’t come from olives at all. Farmer’s markets aren’t immune to fraud, no more than anywhere else, but you learn to trust your nose, to pick up a piece of fruit and veg and check it for freshness and quality, to talk to the stallholder and to ask the right questions.

I was very proud to nominate Ballyhoura Mushrooms for the 2014 Irish Food Writer’s Guild Product of the Year prize and not remotely surprised when they won. Lucy and Mark’s mushrooms are superb, a game changer in that they introduce Irish people to a whole new culinary world, so common on the continent but not traditionally part of our food culture and are a delicious and exceedingly nutritious product that is a valuable addition to our weekly shopping lists.

But the problem with them winning at a time when provenance on a menu is very fashionable indeed is the demand for their multi-award-winning product far outstrips their ability to supply. That is what happens with many small, local, sustainable businesses so some restaurants decide to go out and buy inferior imported produce and pass it off the output of whomever is the celebrated producer du jour. Off the top of my head, I could name five other producers to whom this has happened and it continues to happen to on a regular basis.

No big crime some might say? Well, it completely impugns the integrity of the restaurants that are above this sort of thing and work so hard to support local producers. It completely impugns the integrity of the small producers who work so hard, backbreaking work almost 365 days of the year from which others profit immorally. Still not convinced? I’ve even heard of some restaurants claiming that indulging in this sharp practice was actually “promoting the producer”. Well, can you imagine if I decided to open a pub tomorrow and in that pub and decided to sell my own homemade stout and cola as Guinness and Coca-Cola? I doubt I’d last a wet week before I’d be up before the High Court and left with nary a pot to pee in and nobody would stop for a moment to blame them, me included.

Ultimately, the message is: whenever possible, don’t shop from strangers, and, even then, don’t take someone else’s word for it, learn yourself how to tell the difference between quality and crap. Re-learn the lost art of shopping.

The above feature is the view of one of our members and should not be taken as the view of the Guild as a whole group.