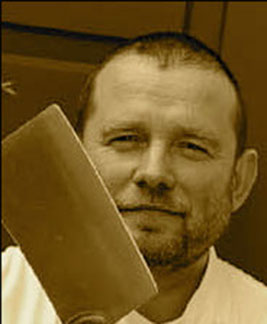 Joe McNamee is a recovering chef and has been writing about food since the late 1990s. He also works as a consultant for small producers, food retailers and the hospitality sector.

Joe is a weekly Food Columnist/Food Feature Writer and Restaurant Reviewer, with The Irish Examiner, and was named Irish Restaurant Writer of the Year (judged by Tom Parker-Bowles and Xanthe Clay) at the inaugural Irish Food Writing Awards, in 2021. He is also a feature writer for Food & Wine Magazine, in the Sunday Business Post; Munster Associate Editor covering Munster for The Sunday Business Post’s annual 101 Great Irish Restaurants Publication and contributor to other publications including Eater, in the US. He was formerly a contributing editor to John & Sally McKenna’s Irish Food Guides for eight years. Joe is the author/ghostwriter of the cookbook/memoir, Clifford & Son (Liberties Press).

Joe is founder, curator and host of Grub Circus, a ‘travelling food roadshow’ combining anarchical entertainment with serious debate and education about pressing issues in modern food systems, reflecting his deep personal engagement with food politics and regenerative agriculture. It was first staged at the Altogether Now Music Festival, in Curraghmore House, Co Waterford, offering a programme of events, debates, discussions and demos, featuring Ireland’s top food personalities, and continues to pop up in other venues and festivals.

Originally trained as a graphic designer, Joe switched to journalism in the late ‘90s, working as a features writer with the Irish Examiner and, then, becoming Deputy Arts Editor. He has over eight years of professional cooking and cheffing experience in Ireland and Britain, including two years as head chef of the late, lamented night time restaurant at Cork’s legendary Quay Co-op. He holds a BA in Culinary Arts (Graduate Student of the Year) from Cork Institute of Technology (Now Munster Technological University), is a member of Slow Food Ireland and the NUJ and dearly loves to commit eating.