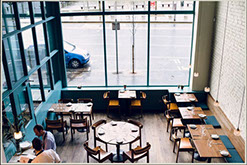 Following Ox’s recent award of a Michelin Star, we thought we’d republish Leslie Williams‘ review from our Guild trip to Belfast last January, which included a meal in the celebrated restaurant.

So you have heard about Ox in Belfast by now, but could it possibly be as good as everyone is saying? As yet there is no established collective noun for Food Writers, but shall we say a plague or swarm of us arrived in Belfast early in the New Year to try the O tasting menu and find out.

Ox is located just off Belfast city centre  in a comfortable modern space facing onto the river Lagan not far from the Waterfront Hall.  Everything about the restaurant from the room, to the staff, to the ambiance, exudes calm and assurance.  There is confidence here, but no arrogance – they know what they are doing is good but they also know they don’t need to boast.

Ox is co-owned by Belfast born chef Stephen Toman and restaurant manager/sommelier Alain Kerloc’h originally from Brittany.  Stephen and Alain met when they both worked at l’Arpège, Alain Passard’s legendary restaurant in Paris which famously serves almost no meat and puts as much care and thought into salt-roasted beets as their lobster braised in Vin Jaune*

(*Vin Jaune is a rarely seen fino-like wine from Savoie and of course there is one to be found on the list in Ox Wine Bar next door.)

Stephen also spent time in other great kitchens (e.g, Noma and Taillevent) and was at one time head chef at James Street South just a few streets away.  You can see influence from these and other great restaurants in the cooking at Ox but there are no homages here, this is straight up, creative intelligent cooking of local produce designed to maximise flavours using whatever technique suits best.

Ox’s Celeriac is not baked in hay just because it looks good on presentatio or is a technique used in Noma or Alinea, it’s because the hay intensifies the sweetness in the root and adds a smoky touch (despite its current fashion baking in hay is an old technique, and I believe I baked a ham in hay in around 1993).

This was my second visit to Ox in less than two months and both meals were quite different in character, despite some of the same ingredients, cooking methods and inspirations – each course felt brand new.

Similarly Alain’s wine matches seemed to have adapted to Stephen’s tweaking of each dish – replacing for example a Chenin Blanc with a Roussanne to take account of the removal of dill but addition of Chanterelle to the scallop amuse bouche.

The first flavour of our meal I have to mention however is the wonderful sour dough bread which arrived in a hessian sack (of course) and was served with creamy salty butter (Abernathy I’m guessing).  I tried valiantly not to eat it all but my dining companions seemed happy to allow me (or was it that I didn’t give them time to demur?).

Next an amuse of Scallops, celeriac, chanterelle and oyster leaf was served with a tangy yet weighty Roussanne/Vermentino from the Languedoc (Dom. La Bastide) which seemed to lift yet also bring out the sweetness in the shellfish and enhance the other earthy salty flavours.

Carpaccio of Finenbroguue venison with black garlic and fermented kohlrabi was served with a layered dense Morgon Beaujolais Cru (Lapierre) to bring out the sweetness in the meat and counterbalance the garlic and kohlrabi.

Wild Halibut was paired with salty ham-hock and leavened with razor clam and Vin Jaune, while rare Chateaubriand steak had sweet shallot, earthy crosnes (baby root artichokes) and some bitter chicory paired with a smoky Aglianico based red wine from Campania (Vesevo).

Dessert of 70% dark chocolate was given some cherry and malt flavours to play with and a sweet  Pacherenc du Vic Bilh wine from Gascony to match – another often overlooked wine not unlike sweet Jurancon.

So in case you hadn’t realised by now, in my view Ox is not just serving great food in a good atmosphere Ox is so much more than the sum of its parts and approaches the sublime.  This is a restaurant you need to visit, and if not for the tasting menu described above, then for the range of gins, the wine bar, the fantastic value lunch (€18 for 3 courses) and most of all, to be inspired.