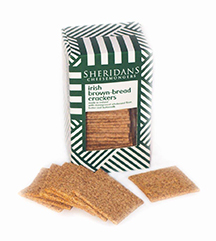 Sheridans Cheesemongers’ Brown Bread Crackers are flying the flag for Ireland in the new M&S range of branded artisan products from across the British Isles.

The range will be stocked in over 400 stores across the British isles and features an array of unique foods from small producers.

Marks and Spencer set about sourcing a select range of artisan products from across the British Isles in early 2014 and is to feature one of Ireland’s best loved handcrafted brands, Sheridans Cheesemongers in the mix.

The M&S new range of branded artisan foods will feature Sheridans Cheesemongers Brown Bread Crackers in over 400 stores in Britain and Ireland.

Sheridans Cheesemongers are Ireland’s leading farmhouse cheese specialists. Unsatisfied with the crackers available to accompany the great cheeses of Ireland and Britain, they decided to create their own. In 2012, Sheridans teamed up with Artisan baker Richard Graham Leigh and created a unique range of handmade crackers. Their Irish brown bread crackers now form part of the M&S range of branded artisan foods.

Fundamental to the creation and production of our brown bread crackers is simplicity and integrity of ingredients and process. Apart from sea salt the crackers have only three ingredients; butter, butter-milk and stone-ground wholemeal flour. These ingredients are all produced a short distance from the bakery.

Traditional brown soda bread; baked daily in the Sheridan family home, was the inspiration for these crackers. The authenticity of the ingredients and technique produces a cracker that is crisp and delicious. Apart from being perfect with cheese, they are ideal for use with any topping or equally scrumptious by themselves.

The bakery is located in Clonakilty in rural West Cork, an area renowned for its food heritage. Sheridans Cheesemongers headquarters are in the picturesque countryside of the townland of Pottlereagh in County Meath. Housed in a converted Victorian railway station, the company HQ also hosts weekly farmers markets and regular food festivals.

“This is great news for the smaller artisan Irish producers. It shows that the Irish food success story is not limited to the large agri-food companies but great success can be achieved by small family owned companies using local ingredients and drawing on Ireland’s rich food heritage. Provenance and heritage have always been a key feature of the foods we have sold over the years as well as in those we have created in more recent years, so we’re thrilled to get this recognition from the team at M&S and be included in its branded artisan product range.”

“These crackers represent for us in the simplest way, the potential of Irish artisan food; bringing together tradition, quality ingredients and creativity.”

“It feels comfortable making this leap from being stocked exclusively in independent retailers to being stocked in M&S, which has always been a retailer associated with only the highest quality. We are really delighted that our crackers will be now available to so many customers across the UK.”