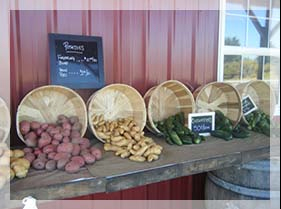 Where can you go that’s less than an hour’s drive from Dublin and where – within a five mile radius of one picturesque town – you could gather together the makings of not one but several great meals? That’s what we wondered when putting together ideas for the Irish Food Writers’ Guild annual summer outing, which took place on a sunny Saturday in August.

The original plan had been to approach some of the heroes of north Dublin food and farming – producers like Jenny McNally of the iconic potatoes, or David Llewellyn of all things apple – and see if they’d show us around their respective homestead set-ups.

But of course, Saturday being a big market day for these farmers’ market legends, the plan was a non-runner before we even got started. There was only one thing for it. I got on the blower to the ever-resourceful Brid Carter. Along with her brother Colm, who looks after the wine-importing side of their business, Brid has built what is feasibly Dublin’s best weekly food market: Honest to Goodness in Glasnevin (www.honest2goodness.ie).

What makes it great is not simply that it is an indoor market, with a café and loads of parking (thanks to its unlikely location in an industrial estate near the cemetery). Nor that is it is abuzz with regular shoppers (despite its unlikely location in an industrial estate warehouse). What makes it great is that Brid was determined from the start that Honest to Goodness be a place where people could do their weekly shop. She lays on stalls providing all the essentials – the meat, the veg, the bread, the cheese, the eggs, the fish, the baked treats. And she chooses her stallholders well, so that you’re guaranteed top quality fare in your basket. You can’t say more Honest to Goodness than that.

Anyway, we called Brid and asked her where we should go and who we might visit. She suggested I speak to Peter Whelan of The Whole Hoggs, who raises rare-breed Tamworth and Saddleback pigs just outside of Slane in Co Meath. These little cuties end up as tasty sausages, rashers and black and white pudding at The Whole Hoggs’s weekly market stall at Honest to Goodness, where Peter and his wife Susan also sell some salami and chorizo he’s been recently experimenting with. We could even – suggested Brid – pop up the road to visit Des Crinion, an organic farmer who supplies eggs to her market but who also produces cheese and ice-cream from the milk of his own herd of sheep as well as selling various produce from his mixed organic farm via an honesty shop on the side of the road. Slane: home to chorizo smokers, ice-cream producing shepherds and honest drive-by consumers of organic produce. Who knew?

The trip-planning took on a life of its own. Every time we rang one farmer to see if he was on board for our visit, he’d agree enthusiastically, but not before insisting that we couldn’t leave Slane without trying his neighbours ice-cream, or seeing his neighbours organic beef herd, or sampling what dishes chef Richard Lucky might conjure up with it all down at Tankardstown House’s Brabazon Restaurant (www.tankardstown.ie).

Added to our list of ‘must-sees’ were Boyne Valley Blue (Michael Finegan’s raw goat milk cheese, www.mullaghafarm.ie) and Shalvanstown (John McDonald’s biodynamic beef and lamb), both of whom are also members of the Slane Food Circle along with Peter and Des (www.facebook.com/SlaneFoodCircle‎). Plus mid-morning coffee at Slane’s Conyngham Arms Hotel, featuring baked treats from the super-stylish Slane Bake (www.facebook.com/slane.bake‎), both owned by the family behind beautiful Tankardstown House, where we were to have lunch. And our final stop off was to be Newgrange Gold (www.newgrangegold.ie) to sample former Attorney General John Roger’s rapeseed and camelina (wild flax) oil, both produced on-site by John and his son Jack at this stunning farm overlooking the Boyne River and several archaeological treasures. Both oils have been picking up various taste-based awards since they launched last year, which is impressive considering the health-promoting omega-rich qualities that come with that fine taste.

It proved a fascinating day – and we left feeling we had just scratched the surface of what’s going on in the area and that there was much more to left to explore. Over on the grounds of Slane Castle, for example, Alex Mount-Charles and his wife Carina have all sorts of free-range-pork-rearing, whiskey-distillery-planning, electric-bike-hiring eco-tourism excitements on their succinctly dubbed ‘Rock Farm’ (www.rockfarm.ie). Nor did we have time to venture down the road to try Bernie Burke’s famous ice-cream, or to drop into The Poet’s Rest café and George’s Patisserie & Deli (www.georgespatisserie.com) to sample the wares of master baker George Heise. But there’s always next time, eh?

With so much to fit in on the day, we were blessed that Peter Whelan was on hand to act as Ambassador Extraordinaire, leading our cars through the lush green laneways from farmyard to farmyard. The Slane Food Circle was conceived as a way of local producers breaking out of what Peter describes as the “lonely business” of being a food producer striving to deliver top-line quality in the face of competitors focussing on bottom-line price. These producers clearly take great energy and encouragement from their contact with one another.

There’s also clear satisfaction in seeing their food served locally, as it is on the menu at Brabazon Restaurant. “What we’re trying to do,” explained Peter, “is to offer local food, locally, and at a good price.” It was fitting then that chef Richard Lucky choose to serve lunch to us family-style, with big hearty platters of beautiful root vegetables grown in Tankardstown’s impressive walled gardens accompanying the free-range pork which Peter himself brought around to serve out. His well-placed pride proved the perfect seasoning to the delicious food, and the itself meal beautiful captured the spirit of Slane and its wonderful food producers. The Irish Food Writers’ Guild would like to thank all at Slane Food Circle, Tankardstown House and Newgrange Gold for their generous time and hospitality – and would like to urge anyone interested in great Irish food to do a little digging in your locality and see what food producers you can unearth. You might be surprised at the riches you can find in just one small area.