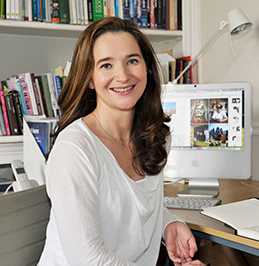 After a four-year stint in London working for Condé Nast Publications, Lizzie Gore-Grimes returned to Ireland in 2002 to spend three months at Darina Allen’s Ballymaloe Cookery School in East Cork, before returning to the publishing world in Dublin. In 2003, she brought together her passion for food and her background in magazines to become Deputy Editor of FOOD&WINE Magazine. In 2005, she went on to become editor of Cara magazine – the in-flight magazine for Aer Lingus. In 2007, Lizzie left Cara to work as a freelance food and lifestyle journalist.

Lizzie has also edited a number of cookbooks to include:

The Keelings Book of Fruit – a small but beautifully produced collection of fruit-based recipes for all the family.

Other food titles that Lizzie has edited include:

She also lectures in Journalism at Independent Colleges, Dublin (www.independentcolleges.ie), where she lectures in Magazine Journalism as part of the BA and MA course. She also devised and ran a special 12-week diploma course in Food, Fashion and Travel Writing offered by the college.