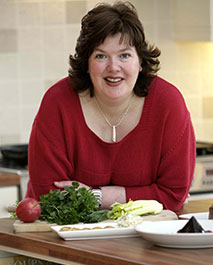 Having trained in Culinary Arts at the prestigious Johnson and Wales University in Rhode Island, USA, Paula McIntyre returned to the UK in 1993 to open her own restaurant in Manchester. A busy and thriving eatery, The Undrie picked up several awards for fine dining including Manchester Evening News newcomer of the year and was featured in several guidebooks and magazines including City Life and Caterer and Hotelkeeper.

Returning to Northern Ireland in 1998, Paula worked as Head Chef in several establishments including Ghan House in Carlingford and Fontana in Holywood.

In 2000 Paula appeared as a guest chef on “Ready, Steady, Cook” beating Paul Rankin in her second appearance. She has been a guest chef on BBC Northern Ireland’s television coverage of the Balmoral Show and featured as a chef on the fly on the wall documentary on the catering industry in Northern Ireland, “A La Carte”. In Autumn 2001 Paula was given her own TV series on BBC 2 NI called “Taste for Adventure”. She appeared as a guest chef with Eamonn Holmes on BBC 1 NI’s “Summer Season” programme and was a reporter on food issues for BBC 1 NI’s “Inside Out” programme. She has also been a guest chef twice on RTE 1’s “Afternoon Show”.

A regular contributor to Radio Ulster, Paula was asked to develop her own series. The result “McIntyre Magic” was broadcast on Saturday Mornings and commissioned 3 times. Since 2004 has been hosting the cooking slot on Radio Ulster’s weekly “Saturday Magazine” show with John Toal. She has also presented the whole 2 hour show in John’s absence. She also contributes regularly to BBC NI news, “Talkback”, “ The Book Programme”, “On your Behalf”, and the “Nolan Show”. She also did live cooking into “Carton and Boomer’s” live breakfast show on New York radio from the Bushmills distillery. She appeared on Radio 4’s “Kitchen Cabinet” Programme, hosted by Jay Rayner, as a local expert. She has also guested on William Caulfield’s comedy show for Radio Ulster and has appeared in his panto!

Paula lectures in catering on the Professional Cookery programme in Northern Regional College.

Additionally she specialises in fine dining and catering for a variety of events and was chef for singer Brian Kennedy’s TV series “Kennedy on Song”. Guests on the programme included Lulu, Barry McGuigan, Michael Ball and Maire Brennan. She guest chefs at special events in Montalto House, both hosting lifestyle days and cooking for special guests like the President of Ireland, Northern Ireland Tourist Board and Lady Gaga.

She has worked as chef demonstrator and live cookery theatre host for the past few years with FoodNI at events like Balmoral Show, Glenarm Castle Festival, Flavours of Foyle Seafood Festival and Clogher Valley Show.

She is a judge for the Hotel and Catering Review’s Gold Medal Awards, the Restaurant Association of Ireland and will be a judge at the 2014

She had a regular cooking column in Sunday Life newspaper for 2 years. Paula contributes to various papers in Northern Ireland including the Irish News, Newsletter and Belfast Telegraph. She currently writes a weekly column in Farming Life.

Paula’s first book “ A Kitchen Year” was published in 2008 by Gill and Macmillan.