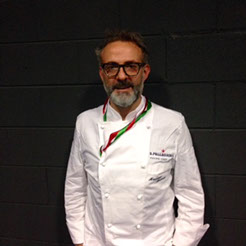 An edited version of this feature first appeared in the Sunday Times on 18th October 2015. By Corinna Hardgrave / www.corinnahardgrave.com.

Ask any of the world’s top chefs what they think is the most important food trend of the moment, and the answer will not be farm to fork or foraging; it is food waste. And like any worthy cause, it is easy to nod dutifully, voice our support and then do very little about it. It takes big guns to get the media to sit up and take notice of the issues that we all pay lip service to, but glaze over after repeated exposure. But Massimo Bottura, the chef behind Osteria Francescana in Modena, ranked number two on the San Pellegrino World’s 50 Best list, has done exactly that. Having opened the Refettorio Ambrosiano (Ambrosian Refectory) – a soup kitchen to feed Milan’s poor using food waste generated from the pavilions of Expo Milan 2015 – he put food waste solidly on the culinary agenda. And he did not do it alone. With high profile names including Ferran and Albert Adria, Rene Redzepi, Alain Ducasse, Daniel Humm, Gastón Acurio and our own Mark Moriarty taking turns cooking in the kitchen, feeding the poor of the area and not the world’s gastronauts, the project is starting to look like something much bigger, with visiting chefs inspired and planning to open similar projects in New York and Lima.

“I see great chefs leaving the Refectory, the soup kitchen, with tears in their eyes,” says Bottura. “Gastón Acurio is telling everyone that it is the most incredible experience he has had in his life, he wants to do something similar in the poorest quarters in Lima. This is what it’s about. For me, it all starts with a fight against waste. We are going to be the ambassadors of this new ethical way.”

Zero waste is not just a good intention, it has become a movement; a push-back against the industrial age, processed food, and farming practices that are driven by industry rather than the welfare of our health. And increasingly, social action is dominating the food conversations of the world’s leading chefs. Douglas McMaster opened the UK’s first zero waste restaurant in Brighton last September; Copenhagen has No Waste Mondays; France recently passed a law banning supermarkets from destroying unsold food, San Francisco plans to have zero-waste by 2020; and René Redzepi of Noma in Copenhagen, Alex Atala of DOM in São Paulo and Ben Shewry of Attica in Melbourne have installed the revolutionary Closed Loop composter which incorporates microbial technology which reduces organic waste by 90 per cent in 24 hours and converts it into an odourless compost suitable for putting back into the soil. Added to that, there are rumours that Acurio is contemplating a bid for the presidency in Peru and it is well documented that Bottura has been approached on many occasions to run for mayor of Modena.

“Social responsibility is something that is going to be more important every year,” says Bottura. “At the moment, you have this question, how do we feed the planet? To feed the planet, for me, the answer is first of all, to fight the waste. If you look at the figures from the FAO [Food and Agricultural Organisation of the United Nations], 1.3 billion tonnes of food is wasted every year, a fourth of which would be enough to feed all those in need, and this is not acceptable. We have to make visible, the things that are invisible. So from a very ripe dark banana, to an ugly tomato. From leftover breadcrumbs to a cheese, you can create incredible things. And I’m living this kind of experience.”

While Expo Milan, which finished at the end of October, has put the global spotlight on food with its theme “Feeding the Planet, Energy for Life”, closer to home, the Irish Food Writers’ Guild launched their first Social Responsibility Awards on Wednesday 14th October in recognition of the contribution made by Irish food businesses, non-profit organisations, and individuals in furthering social responsibility in the food sector.

Bia Food Initiative (BiaFi), a food bank set up in Cork in 2014 which facilitates the transfer of surplus food from food-related businesses to charities, was awarded the IFWG Social Responsibility Award for 2015. And Dublin Simon Community’s Soup Run, which was founded by a group of Trinity and UCD students in 1969, who began by providing much-needed soup and sandwiches to people who were sleeping rough in Dublin city centre and still goes out 365 nights of the year, was considered by the judging panel to have contributed at such an outstanding level that it was immediately entered into the IFWG Social Responsibility Award Hall of Fame.

“The Bia Food Initiative started as a concept back in 2012,” says Karen Horgan, project manager at the BiaFi in Cork. “A working group from industry, the charity sector and the environmental sector got together, recognising that there was a need for a safe and secure avenue for surplus food redistribution in Ireland. It took from then till 2014 to get the funding together and the plans in place, to turn it into a physical reality. So we opened a warehouse in Cork in July 2014. We’ve been in operation for the last 15 months and at this stage we’ve redistributed 280 tonnes of surplus food.”

Companies within the Irish food sector, including retailers, distributors, food growers, food producers and food manufacturers, have signed up as registered donors, and when they have a surplus within their process, they put a call into BiaFi and deliver their surplus to the warehouse where it is broken down and redistributed to charities. “At the moment, we distribute to about 53 charities in the Munster region but we’re due to go nationwide at the end of November with another depot in Dublin and one in Galway,” says Horgan. “We have no idea what we’re going to get from week to week. We get different types of donations. We have a big fridge and a big freezer here that the JP McManus Fund provided for us, so we get in yoghurt, cheese and meat which we turnover very quickly and we get some ambient product which we can store for longer periods of time and drip feed into the charities. We also get donations of breakfast cereals from Kellogg every month so we send them out as they are required by the charities. Sometimes we get in food in big bulk which we can freeze and send out to the charities in a controlled period over the weeks.”

The charities supplied by BiaFi include children’s breakfast clubs and after school clubs, St Vincent de Paul, which distributes food to families in need in their particular area and hostels which include Penny Dinners, drug and alcohol abuse centres and the Simon Community in Cork.

“The Soup Run is operated by dedicated teams of over 100 part-time volunteers who walk the streets in all weather; offering soup, sandwiches, tea and a good chat if so desired, to people who are homeless around the city,” says Sam McGuinness, CEO of Dublin Simon Community. “For people who are going through the most difficult times of their lives, accessing basic needs such as food, clothing and the chance to see a doctor, is often the first step that they take on the journey out of homelessness. Our volunteers use these steps to engage people, to establish the trust they may have lost through years of fear and vulnerability.”

The IFWG also awarded commendations to two enterprise – the Flanagan’s Fields Project, which is a community garden in Rialto and also houses Dublin’s first geodesic dome which enables the people who garden there to extend the growing season by using state-of-the-art technology; and Healthy Food for All, an all-island community and school food initiative that aims to alleviate food poverty in low-income communities by fostering positive changes in nutrition and the healthy eating behaviours of families and young people. “In the beginning, a lot of people were wondering about vandalism, but there has been absolutely nothing,” says Eilish O’Carroll, the chairman of the garden at Flanagan’s Fields. “It is very well used in the community by the people from the old Fatima area as well as people who have moved into the community over the last 10 years. UNESCO do some placements in the garden and we have two fulltime TUS workers, who are long term unemployed, and that has been very successful because all of them have got work afterwards. It has been really good for integrating the community and been a major catalyst for change in the area.”

Sinead Keenan from Healthy Food for All has seen a huge impact from their work on their schools’ project. “The government has a fund of €139 million for school food projects, yet there are 100 Deis schools which aren’t able to avail of this funding because either they don’t have the facilities or the staff. So they need to know that they can draw on school completion programmes or community supports. And we provide them with that information and guidelines for setting up breakfast clubs,” she says. “In schools where breakfast clubs have been set up, the feedback has been phenomenal. In a north county Dublin school where we ran a pilot scheme, the principal was telling us about a child who was regularly coming late to school, but once they’d set up the breakfast club, he was first to the gate at five to eight. He’s having his egg and toast or whatever is available on that day. The school staff really see the benefit to the pupils and there’s a huge level of buy-in.”

“At the Irish Food Writers’ Guild, we felt that we could shine a bit of a spotlight on some of the projects and the enterprises that are tackling food in the context of social responsibility. We wanted to educate ourselves as a guild about this activity and then, the public at large,” says Aoife Carrigy, chairman of the Irish Food Writers’ Guild. “When we were judging the awards, one of the things we really liked about the Bia Food Initiative is that there’s a dual purpose there; they’re tackling food waste as well as food poverty. They also have a very ambitious scope; they have a warehouse in Cork and they’re also opening ones in Tallaght and Galway, so that sort of nationwide scale is very impressive.

“And we were also impressed by the simplicity and clarity of their concept. They are very much the middle man, providing a logistical solution for retailers and producers who have large quantities of food that they could provide to charities, but charities often aren’t in a position to take those quantities, or the retailers aren’t in a position to distribute them over a broad geographical base. It’s a simple but effective solution to the problem. With Simon Community, we thought it was so important to recognise what they have been doing over the years, how they go out every night on the soup run. The value is so much more than the nutritional value, it’s all the human connection around that.

“Our plan is the IFWG Social Responsibility Awards will continue as annual awards, running in parallel to our food awards which run in spring. The important thing is, we do accept nominations from the public for these awards, which we don’t for the food awards, so it’s a way of engaging and we hope to build on that. In terms of the kind of people we’re looking at, we believe that it’s important to look at small communities as much as we do at the large scale initiatives and projects. Every initiative has an impact.”