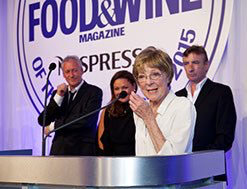 Warmest congratulations to our fellow Guild member and dear friend,

Biddy White Lennon, on her entry to the Hall of Fame at the 2015 Food&Wine Magazine Restaurant of the Year Awards, held at Dublin’s Intercontinental (former Four Seasons) Hotel in Ballsbridge in August.

According to the official citation, the reasons for the award were many and various. Although her acting career was successful (she is still The Riordans’ ‘Maggie’ to many fans) it allowed her time for developing other interests, including foraging (a lifelong love), cooking (professional and domestic), and recipe development (using her knack for turning ‘cheffy’ recipes into more accessible, readable ones). All of which led to her doing radio and TV work about Irish food (most recently the very successful Great Irish Bake Off), and writing food columns and cookery books. Often written with an emphasis on Irish food history, customs and folklore, her many books are not only delightful to read, but also an important contribution to the preservation of our food heritage, providing a vital resource for those with an interest in Irish food culture.

In 1990, Biddy was one of a dozen food writers who banded together to form the Irish Food Writers’ Guild and, since then, she has been one of the Guild’s most active members in working to promote food education, influence food policy and champion Irish food producers – especially through the annual IFWG Good Food Awards, which give independent recognition to the best Irish artisan foods and their producers, and have been dear to her heart since their inception in 1993.

Biddy’s most recent book, the very timely ‘Wild Food’, was written with Evan Doyle, of BrookLodge Hotel, and they also worked together to found the Slowfood Sugarloaf Club. This Wicklow-based branch of Slow Food Ireland organises wild food events like the Wild & Slow Food Fair held in Macreddin Village each autumn, which Biddy was instrumental in establishing. It’s a wonderful showcase of wild food prepared using age-old techniques of pickling, drying and smoking – techniques that Biddy herself is accomplished at, having always had a keen interest in researching and learning all there is to know about Irish food history.

Evan Doyle tells a lovely story about Biddy. He loves it himself and says, quite rightly, that it sums up her generosity as well as her real love of food, so he went off script to share it with the great and good of the Irish food world who had assembled for the Awards event.

As some will remember, Evan’s famous County Wicklow restaurant The Strawberry Tree originated in Killarney, where he established its unique organic and wild credentials, and was lucky enough to have the run of the National Park for foraging. The move to Macreddin Village brought big changes, including the loss of access to a treasured foraged food: wild garlic. But Biddy and her husband Denis lived in an Enniskerry gate lodge at the time and, their woodland garden being awash with wild garlic every spring, she gave Evan and his kitchen team free rein to help themselves. Problem solved – until Biddy and Denis decided to move, and their house was sold…So, realising the crisis that loomed in the kitchens at BrookLodge, Biddy lifted the phone to the new owners (who, as far as I can gather, nobody ever actually met) and said there was a condition of the sale that she had forgotten mention: i.e. on one day each year, Evan and the BrookLodge chefs had access to the garden, to pick as much wild garlic as they wanted; in exchange, they would leave a hamper of BrookLodge goodies. This did not appear to cause a problem and Evan says that it worked very well. He and his team harvested as much wild garlic as they could gather, left the hamper and disappeared back to Macreddin – without ever seeing anyone. Who but Biddy White Lennon would think of such a thing, he asks? Who indeed. You couldn’t make it up.

So, the official citation may tell all the facts and figures of Biddy’s Irish food story, but Evan’s story gets to the heart of it.

But how do you keep such an award as a surprise? There seems to be a well tried formula for these things, as I discovered at the UK’s Guild of Food Writers Awards in June. I happened to be on Rick Stein’s judging panel for the awards, which he attended along with all the other judges – and was completely taken aback, and very disarmingly (almost) lost for words, to find that he was himself the recipient of the Guild’s most prestigious gong, the Lifetime Achievement Award. And it was the same for Biddy. Having been on the judging panel for the Food&Wine Magazine Restaurant of the Year Awards for many years – and attending the event as usual – it never crossed her mind that she, along with the equally deserving but perhaps rather more predictable Neven Maguire, might be called up to the stage to join the Hall of Fame.

And what a wonderful moment in the spotlight for Biddy, to get such public recognition for her contribution – a work in progress still, of course, but so far so very good indeed. Emotional, but happy, it was very special for her and for her many fans. Well done Bid!