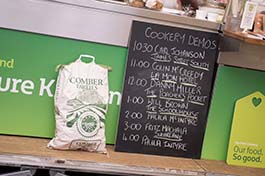 Ireland’s answer to the famed Jersey Royal early potato from the Channel Islands, the New Season Comber Potatoes (or Comber Earlies as they are also known) are this island’s flagship potato and one of only a small handful of products here to have the right to use the blue and yellow EU PGI (‘Protected Geographical Indication’) logo.

It’s a recognition that should be applied to far more Irish foods but, as chairman of the Comber Earlies Growers Co-Op, Richard Orr, and his co-campaigners know all too well, takes not just a unique product but also patience and determination to achieve.

So what’s so special about the Comber Earlies? Well, the answer lies in the soil and, especially, the microclimate of the Comber area, which is sheltered by the Mournes and the Ards Peninsula and protected from frost by the salt waters of nearby Strangford Lough, allowing for an earlier harvest than other potato-growing areas and a sweet, nutty flavour that is common to the varieties grown in the area. These include modern varieties like Accord and Casa Blanca as well as old favourites such as Homeguard and Dunluce, and it is the growing and early harvesting in this particular area of Co Down that makes them unique, rather than the variety.

Only potatoes harvested in May, June and July may be marketed as New Season Comber Potatoes or Comber Earlies; they can be round or oval according to variety but, being harvested young, they will be quite small and have the thin, flaky ‘new potato’ skin that is typical of potatoes that are lifted while the foliage is growing strongly. Later varieties harvested after the foliage has died back (or been removed) have more robust skin which makes them less susceptible to damage and they keep better, and it’s important to remember that earlies are for immediate use. These are the sort of spuds you would dig in your garden and take straight into the kitchen for dinner to enjoy their summery flavour that night, so 24 hours from farm to fork is the farmers’ aim.

New potatoes are a dish fit for a king when cooked simply – steamed or boiled lightly in water or milk and water, with a sprig of mint – and served with a good knob of butter and a sprinkling of sea salt. But, needless to say, Northern Ireland chefs have other ideas, as proved by demonstrations at the Comber Potato Festival in June, which was attended by a great range of inspiring chefs including Danny Miller from The Poacher’s Pocket nearby at Lisbane; Will Brown of The Old Schoolhouse Inn, Comber; Fritz Machala of Sugarcane Bistro, Comber; BBC Radio Ulster chef, Paula McIntyre; Carl Johansson of James Street South Bar and Grill, Belfast; and Colin McCreedy, of La Mon Hotel & Country Club, near Belfast.

This lovely simple dish is from Carl Johannson of the very popular James Street South Bar and Grill in Belfast. It is quick and easy to make if the lobster has been prepared ahead of assembly.

Flesh of a freshly cooked 2lb lobster (boiled for 8 minutes)

1. Bake the pancetta until crispy.

2. Boil the Comber potatoes in salted water until tender then drain.

3. Mix together the Comber potatoes, capers, shallots and tarragon with two cups of mayonnaise.

4. Place into a clean serving bowl and arrange the lobster, pancetta and watercress on top.

This beautifully understated dish is from Danny Miller at The Poacher’s Pocket, Lisbane – and, like all simple dishes, success depends on quality ingredients and skilful cooking. Peter Hannan’s famous steaks, from his unique Himalayan salt aging chamber in Moira, are perfectly complemented by the warm Comber potato salad.

1. Season the sirloins on both sides and cook on a hot pan for 2 minutes either side (for rare) and leave to rest.

2. Mix mayonnaise and horseradish together and combine with sliced Comber potatoes and scallions. Check seasoning and place on serving plate.

3. Slice the steak and place around potato salad. Drizzle over any juices from the steak

A lovely versatile side dish from Colin McCreedy of the La Mon Hotel & Country Club, near Belfast.

Butter and olive oil, as required

1. Scrub and wash the Comber Earlies. Boil in salted water for 20-25 minutes or until tender, then drain and keep warm.

2. Place a pan on a medium-high heat, add a good knob of butter, a drizzle of olive oil, the sliced garlic and sprigs of rosemary; season and sauté for 1 minute.

3. Add the Comber Potatoes to the pan, coat with the butter mixture and cook for 4-5 minutes to roast and crispen the skin. Take care to keep rolling potatoes in the pan to brown the potatoes evenly and prevent burning.

Although mainly used in main courses and side dishes, potatoes are extremely versatile as an ingredient and especially valuable for adding moisture and texture to baking and desserts, in a similar way to ground almonds. This more-ish dessert is from Colin McCreedy of  La Mon Hotel.

2. Place the bowl over a pan of boiling water, and then leave for 5-10 minutes to melt together.

3. When the ingredients have melted, use a wooden spoon to mix them and combine thoroughly together

4. Remove from the heat and beat in the egg yolks

5. Add the baking soda to the hot water, then whisk into the chocolate mixture

6.  Gradually fold in the sifted flour and baking powder, to make a smooth batter

7. Using an electric mixer, whisk the egg whites in a clean bowl, then carefully fold into the cake batter in 3 stages.

8. Pour onto a baking tray or a cake tin lined with parchment paper

and bake in the preheated oven for 45-50 minutes, or until firm and springy to the touch.

9. While the cake is baking, make the topping: Break up the dark chocolate into smaller pieces and place in a medium sized bowl. Boil the cream and pour onto the broken chocolate pieces, whisk well to combine with the melted chocolate, creating a smooth glossy ganache topping. Set to side until required

10.  Remove the fudge cake from the oven leave to cool in its baking tray/cake tin to keep its shape.

11.  When cold, peel the paper from bottom of the fudge cake, turn right side up and coat with the prepared chocolate ganache topping.

12.  Leave to set, and then cut into portions and serve at room temperature or warm, with your favourite ice-cream.