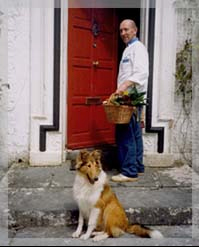 It was with great sadness that we learned of the untimely death of Gerry Galvin earlier this year – friend, colleague and inspiration for so many years.

It’s hard to believe he’s gone, he was a gentlemanly giant of the hospitality world, quietly involved with so many good things right up to the end – and with many more still in the planning.

Few people are blessed with so many talents and interests, and the intellectual curiosity to keep on looking at things differently. Chef, food writer, poet and even crime writer, he loved a challenge. He was an original.

We all owe a great debt to Gerry for the contribution he made to developing the pride in Irish ingredients that we now tend to take for granted, helping to grow artisan food production, and to develop a distinctive cooking style inspired by our seasonal foods. I doubt if he would have called it a ‘cuisine’ although he did use the phrase ‘a new Irish kitchen’, notably in his first book, The Drimcong Food Affair (McDonald Publishing 1992) which makes a fascinating read for anyone who is interested in that crucial stage of Irish food development, and in his own career. Gerry also did a lot to develop food tourism and even, in a more general sense, contemporary hospitality – going way back to the ‘70s, when I first met him and his wife Marie at their Kinsale restaurant, The Vintage, he was one of the forward-looking group of energetic and talented people who established the Kinsale Good Food Circle and the Kinsale Gourmet Festival – both are thriving to this day, but it was the calibre of restaurants like The Vintage that earned the town its ‘gourmet capital’ title.

Just last May, Euro-Toques Ireland gave Gerry a special award for his ‘Outstanding Contribution to Irish Food’ and it would be hard to imagine a more fitting tribute. Many fortunate chefs owe their education and training to him, and, along with Declan Ryan of Arbutus Lodge & John Howard of Le Coq Hardi, he was one of the founding commissioners called into service by Myrtle Allen when she established Euro-Toques Ireland in 1986, “to protect the food quality and culinary traditions of this country”. She chose well, with both Gerry and his companion commissioners leading by example and, through their dedication, inspiring many others to support the philosophy of sourcing top quality local and seasonal food ingredients. The importance of this philosophy is all too obvious now, but how much worse the future would look if we didn’t have this dedicated – and experienced – band of professionals fighting the case for real food.

I made many happy visits to Gerry and Marie’s restaurants through the years, both in Kinsale and at Drimcong House at Moycullen, Co Galway – on one especially memorable occasion visiting Drimcong I had two of my sons in tow and they were enormously impressed; the little one, who can’t have been more than seven or eight, hopped up onto his chair with a camera to get a good shot of his plate before tucking in, much to the amusement of (most of) the other diners – it was well before the days when we all started snapping our dishes on mobile phones. The cooking was famously innovative but it’s the freshness of the ingredients, especially the immediacy of garden produce, that stands out most of all in my memory. As Gerry summed it up on the back of his second book, Everyday Gourmet (O’Brien Press, 1997), his philosophy was simple: “all you need are fresh ingredients and a sense of adventure”.

Gerry earned many accolades as a chef and restaurateur and I was one of the fans, being very happy to see him receive awards such as the Egon Ronay Chef of the Year (1994) and, later, recognition from our own Guide including the Natural Food Award in 1999. But Gerry and Marie decided to take early retirement and, once Drimcong House had been sold (and they’d had their famous ‘year in a camper van’ trailing around Europe), Gerry continued to take an interest in the hospitality industry, but from a different perspective – and one of the things that he did exceptionally well was to send independent reports on his travels around the country to us at Georgina Campbell’s Ireland Guide. No detail escaped him and his writing was a delight, being both spare and evocative; those telling phrases sprinkled through both our website and printed guides will be a reminder of what we have sadly lost for a long time to come.

In common with several other leading chefs in the ‘70s, ‘80s and ‘90s, Gerry was putting our simple, traditional ingredients back on the menu and creating new dishes to show them in a different, more appealing light. Black pudding was a notable example, and some very imaginative dishes evolved around it, especially as first courses. For a very grand dinner held in Trinity College, Dublin for the Euro-Toques movement – I think in 1987 – Gerry, a Euro-Toques commissioner at the time, created a first course of Clonakilty black pudding with Irish mustard sauce and a surprise element – warm oyster and apples. It went down a blinder, and became something of a speciality, both  with and without the oyster.

But the original recipe remained deeply buried in County Galway, so when I wanted to use it in my book Good Food From Ireland (Grafton, 1991), I gave a delicious (but far less adventurous) brunch variation of his dish instead with the advice to “Make sure you get a good, grainy black pudding for this, preferably the lovely loose-textured one from Edward Twomey in Clonakilty. The sauce can be made the night before, then warmed through while the black pudding is baking in the oven.” Bord Bia championed these creations and published numerous variations on the theme, including this one on a bed of potato which was cooked in the same way as boxty-in-the pan (now coming back into popularity) although it was not named as boxty.

Black Pudding on a Bed of Potatoes & Apples

A quality black pudding, like Clonakilty, is essential for this dish. Serves 4

Grate the potatoes. Put into a bowl of water as you grate, then drain and squeeze out the excess moisture.

Heat the olive oil in a non-stick pan. Add the grated potatoes and seasoning. Press into the pan shape, allow to cook until nicely browned then turn over and cook on the other side. When completely cooked slide onto a warm plate and keep warm.

Heat a little more oil and sauté the pudding and mushrooms together for a few minutes. Then sauté the apples. Add the sherry vinegar to the apples, boil up the juices, add in knob of butter and seasoning.

Place the pudding and mushrooms on the bed of potatoes, pour over the apples and juices. Cut the potato cake into wedges and serve.