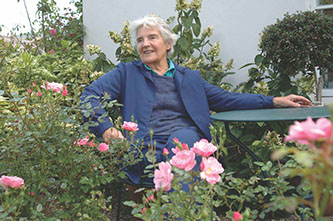 “It’s impossible to overstate the impact that Mrs Allen single-handedly had on Irish food and hospitality. While the development of Irish food over the last five decades may now seem like a logical progression, much of it is down to the vision, hard work and determination of one person: Myrtle Allen. Her philosophy of serving simply prepared, seasonal, local food and supporting local suppliers put her ahead of her time. She championed our top-class produce when no one else was and showed us – and the world – that the food on this island is something special that we should be proud of.

The words used to describe her are ones like visionary, pioneer, trailblazer, inspiration, legend. She was, and will always be, one of the towering figures of Irish food. We are all the richer for her lasting contributions to the Irish food culture.”

“A number of years ago, quite early on in my career here, I was asked to write some promotional material for dry cured bacon. A trip was arranged for me to see the bacon production and the pig farm that went with it. I was horrified by the intensive farming methods of pigs being kept penned in sheds, standing on concrete their whole lives, with only an empty plastic milk container dangling on a string as a ‘plaything’ to amuse them.  I knew I was going to have to go back and  tell the client that even though the bacon production was fine, I wouldn’t be able to write the material because of the farming methods. The thought of it kept me up at night for quite a few weeks!

Shortly after the farm trip, I was part of a group that visited a sea urchin production. Myrtle Allen was also part of the group. We were being shown how they were bred, when Mrs Allen, who was peering intently into one of the nursery tanks containing the almost microscopic baby urchins, asked ‘Do these creatures ever see a rock pool?’  Myrtle Allen’s simple question about whether sea urchins ever got to see the great outdoors in their short lives showed the conscience and integrity for which we all knew her well.

It totally put into perspective my own dilemma about the pigs and turning down a job, making me determined never to be afraid to ask how things are done, nor of speaking out when they aren’t done to a level I am happy with,  as a food writer. As professionals of the industry, we are charged with responsibility to educate and inform.

So thank you Mrs Allen. You left a great legacy, not just for the Irish nation in appreciating its home grown, home made foods and core ingredients, but for us as food professionals,  who would strive to reach your high standards of quality, conscience and integrity at all times.”

Written as an open letter on the Ballymaloe Cookery School website, Darina beautifully speaks of the late Mrs Allen and shares a recipe from her. Read it here.