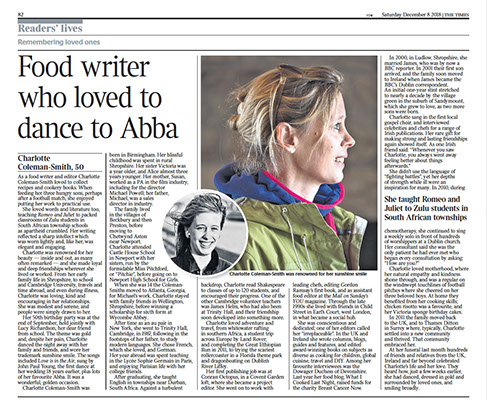 Food writer and member of the Irish Food Writers’ Guild, Charlotte Coleman-Smith passed away in December. Here, she is remembered in print and by her fellow guild member, former colleague and IFWG Outgoing Chair, Aoife Carrigy.

“Charlotte was a contributor to FOOD&WINE Magazine during my time there as Deputy Editor and I always enjoyed subbing her copy for her regular ‘This Much I Know’ column, in which she interviewed many legends of Irish food.

We learned that Denis Cotter of Cafe Paradiso was an accidental vegetarian who had grown up a finicky eater and that he had great admiration for Paul Flynn, who – “even though he denies it” – does great things with vegetables. That supremo smoker Sally Barnes of Woodcock Smokery (who identifies with salmon as she has “swum against the tide all through [her] life”) began her first experimentations when her fisherman husband was paid for a haul of salmon with a kiln rather than cash. How second-generation baker Robert Ditty turned back to baking after his sculpture studio got blasted in a Castledawson bomb, and that food  offered him a real and much-valued connection with his local community. And that Richard Corrigan values honesty, loyalty and optimism, describes his food as “passionately pure” – and wishes his tongue was!

Though each feature was written in the first-person voice of the interviewee, I came to recognise and admire Charlotte’s own elegant voice which shone quietly through in her skilful and subtle portraits.

I was concerned to hear of her initial encounter with breast cancer and greatly relieved when she recovered from it, so it was with great sadness that I learned of her recently death. Our thoughts our with her family – and with Charlotte herself.”