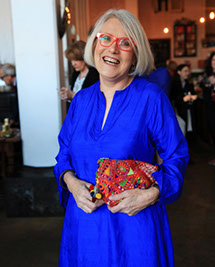 Darina Allen is Ireland’s most famous cook and a best-selling author who has presented eight series of her cookery programmes Simply Delicious on television in Ireland. A tireless ambassador for Irish food both at home and abroad, Darina is also a passionate and committed teacher and students come away from Ballymaloe inspired by her energy and ideas and the enthusiasm she and her team bring to their work. She has been instrumental in setting up the Farmers’ Market movement in Ireland, the International Slow Food Movement for Ireland and is a member of the Consultation Council of the FSAI. Darina chairs the Artisan Food Forum which liaises with the FSAI to articulate the difficulties and challenges experienced by the Artisan and Speciality food sector. She is vehemently opposed to the growing of GM crops in Ireland.

The Ballymaloe Cookery School was established in 1983, operates all year round and attracts students from all over the world. The school’s culinary philosophy is based on enhancing the natural flavours of the best and freshest local ingredients. It offers a wide range of courses from 12-week professional courses for students who wish to pursue a career in catering, to short courses ranging from a day to a week long on a variety of subjects, including Simply Delicious Food Fast, Bread Baking, Seafood, Entertaining, Vegetarian, Introductory, How to Keep Bees and Have your own Honey, How to Keep a few Chickens in the Garden, How to Build a Smoker and Smoke your own Food…

In November 2011, The Ballymaloe Cookery School was awarded a José Navarro Foundation Award at the Premios Verdes Awards 2011 (The Green Awards) in Valencia in the modality of  Business In The Field Of Restoration. The main objective of these awards is to recognize the excellent performance that certain people and entities have brought out in investigation, development, and promotion of responsible nutrition and its repercussion in sustainable development, therefore encouraging ‘Intelligent Eating’ in our society.

In April 2010, Darina received the Mike Butt Ward (honoured by the Restaurant Association of Ireland for her contribution to the Irish restaurant industry and food movement).

She was awarded with the Cooking for Solutions Conservation Leadership Award – Chefs of the Year 2008.

In 2007 Darina won an award for her outstanding contribution to the Irish culinary sector by Euro-Toques at their 2007 Food Awards in association with The Cavan Crystal Hotel.

International Cooking Teacher of the Year awarded by IACP 2005

Darina received an Honorary Doctorate from University of Ulster at Coleraine, 2003