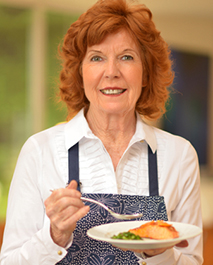 Connemara native Máirín Uí Chomáin is a former chair of the Irish Food Writers’ Guild, an active member of the Slow Food movement, and holds an honorary MA from NUI Galway in recognition of her commitment to home economics. For most of her career she taught home economics at Ballsbridge College of Business Studies in Dublin.

Máirín also worked in a variety of other roles including lecturing on home budgeting and consumer behaviour for national agencies, providing advisory services for food businesses, and as a catering supervisor at Cornell University (USA). She was external examiner at Trinity College for the B.Ed. in Home Economics. Becoming a learner herself, she took advanced courses in cookery and culinary arts. More recently, she has judged national competitions in food presentation and cooking.

Besides being a frequent contributor to radio, Máirín has presented her own RTE series of television cookery programmes, ‘Cuisine le Mairin’ and ‘Encore Cuisine le Mairin’. She wrote the bilingual texts for these series, as well as two illustrated cookery books for children, one of which won a Bisto Book award.

Máirín is the author of Irish Mussel Cuisine (2011) and Irish Oyster Cuisine (Gourmand World Cookbooks Award 2004; Food & Wine magazine Food Book of the Year 2005). Broadcaster and writer Monty Halls described Máirín as ‘the high priestess of all matters pertaining to shellfish… A larger than life figure with the warmest of smiles and gentlest of accents.’